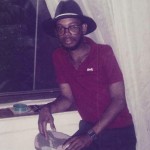 Gary Sanders, aka,”Runt” aka “G-Man” was born on November 19, 1950 in Bronx, NY to the late Pauline and Johnny Sanders. He went to Samuel Gompers High School, where he received his High School Diploma. Gary worked tirelessly at the New York City Housing Authority as a boilerman for 26 years. He retired in 2009. Gary loved his job immensely, but not as much as he loved him some Vickie Brown.

Gary met the love of his life Vickie in 1977. They were inseparable, where Vickie was Runt was, where Runt was Vickie was, until God called her home in 1988.

During that time, Runt had many hobbies, but his favorite one was playing video games. Some of his games were, “Call of Duty”, “Assassin Creed”, “Cradle of Empire and “American Truck Simulator just to name a few. He would spend endless of hours playing in his room. When he would finally come up for air and if it was baseball season, then one team that would be front and center would be the New York Yankees. Runt could tell you all about the Yankees, their stats, the players, who’s being traded and who’s staying. One of the many qualities, we loved about him.

Runt was also a movie man. Though he didn’t get out much, he sure watched lots of movies. He would compare notes with his partner in crime, Margaret from across the hall. You would have thought they were in the same room, the way they conversed with each other. A few of his favorite movies and TV shows were, “The Lion King”, “Jaws”, “Chucky”, “ I Love Lucy”, “Family Guy”.

Runt loved his family and loved telling his life stories. He was a giving and caring man. He will be missed.

To send flowers or a remembrance gift to the family of Gary Sanders, please visit our Tribute Store.

Preserve the memories and special thoughts shared
by friends and loved ones with a Memory Book.

View More Obituaries
HAVE A QUESTION WE CAN HELP YOU WITH?
We invite you to discuss freely and frankly with us questions you may have, regarding these and any and all respects of the funeral.
Contact Us »
LEARN ABOUT THE BENEFITS OF PLANNING AHEAD
Get Details »